Scientific studies continue to show evidence that exposure to man-made (incoherent) EMF radiation can have negative effects on human DNA and the body.

As the usability and convenience of portable electronic devices continue to grow in popularity, exposure to close range EMF radiation has increased 10-fold. In many cases, these devices such as cell phones and tablets are in close contact to our bodies all day long. This close range of contact along with extensive usage greatly increases our exposure to EMF radiation.

The intensity of electromagnetic radiation in our environment is increasing at unprecedented rates and is currently reaching astronomical levels that have never before been experienced on our planet.

The most influential process of EMF impact on living organisms, is its direct tissue penetration. It is well known that weak EMF’s can cause all sorts of dramatic effects in human DNA, body cells, tissues and organs. The observed symptoms can hardly be assigned to other environmental factors occurring simultaneously in the human environment.

Although, there are still ongoing discussions on non-thermal effects of EMF influence, the International Agency for Research on Cancer (IARC) along with the Agenda of World Health Organization (WHO) has classified radio electromagnetic fields to a category 2B as potentially carcinogenic. Electromagnetic fields can be dangerous not only because of the risk of cancer, but also other health problems, including electromagnetic hypersensitivity (EHS).

Electromagnetic hypersensitivity (EHS) is a phenomenon characterized by the appearance of symptoms after exposure of people to electromagnetic fields, generated by EHS is characterized as a syndrome with a broad spectrum of non-specific multiple organ symptoms including both acute and chronic inflammatory processes located mainly in the skin and nervous systems, as well as in respiratory, cardiovascular systems, and musculoskeletal system.

As you can see in the photo, use of EMF producing devices produce a tremendous breakdown at the cellular level which leads to many other problems including mental illnesses (Alzheimers, Dementia, and depression), insomnia, Cancer, Autism, ADHD including problems related to memory loss, attentiveness and focus, and other chronic disease states.

Understandably, the most dangerous thing we need to worry about is the link between EMF exposure and DNA fragmentation which can lead to gene/cell mutations and ultimately cancer.

With rapid advances in electromagnetic field (EMF) technologies and communications, children are increasingly exposed to EMFs at earlier and earlier ages.

There is consistent epidemiological evidence associating exposure to extremely low frequency (ELF) magnetic fields with many childhood ailments such as leukemia. 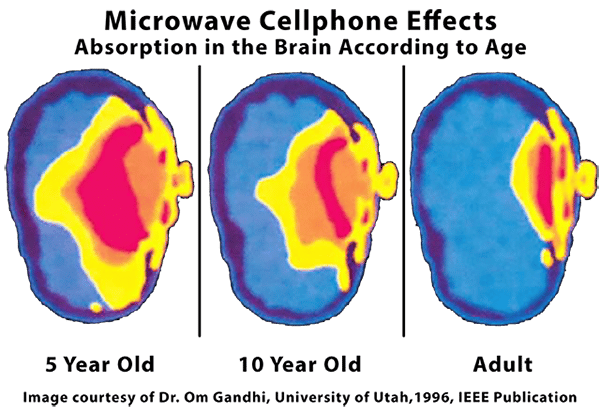 Children in general, are at a particularly greater risk from EMF exposure due to a higher absorbency rate than adults. Findings from The Stewart Report show that children absorb as much as 60% more energy per pound of body weight than that of human adults.

EMF’s hit DNA in reproductive tissues especially hard as there is no bone protective barrier between our wi-fi devices and a female’s ovum or a male’s testicles.

Recent studies show that continuous exposure to EMF radiation, especially from close contact cell phones drastically reduces sperm count and motility. Studies also show how DNA in the female’s ovum is also greatly altered.
Wi-fi is impacting not only those who wish to conceive now, but also future generations. The damaged DNA from the parent is passed along to the fetus, affecting future familial lines.

Females are born with all of the reproductive eggs she will ever have. Every little girl using a cell phone or wireless device now is at risk of having fertility issues later in life because of the cumulative radiation exposure she is subject to today. This cumulative EMF radiation exposure damages the reproductive system in the fetus growing inside the pregnant mother’s womb as well, multiplying the risk from generation to generation. 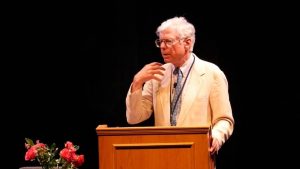 Dr. Pall’s research on the biological effects of EMF radiation provides us with valuable information on how EMF radiation impacts our bodies.

Martin L. Pall, PhD, is a Professor Emeritus of Biochemistry and Basic Medical Sciences at Washington State University. His publications include numerous studies on the biological effects of electromagnetic fields and the implications it has on the electrical systems in our bodies.

The effects of EMF radiation exposure are a deep concern and can be very symptomatic in nature. Many symptoms might be obvious and some not so obvious. Below are some of the symptoms you may experience from EMF exposure.

Prolonged EMF radiation exposure can have negative effects on the human body in many ways:

READ NEXT: How To Protect Yourself
JOIN OUR NEWSLETTER

Join The Aulterra Newsletter And Receive Exclusive Discounts And Content

Join The Aulterra Newsletter And Receive Exclusive Discounts And Content.